What is hunger?
Hunger is the personal, physical sensation of discomfort from a lack of food. Hunger can also lead to a lack of concentration, irritability, and social and behavioral issues — particularly in children. Individuals who are food insecure may experience hunger.

Food Insecurity in Our Community

Food insecurity exists in every city, township, and zip code of Washtenaw County. In 2021, Feeding America projects that 42,450 individuals will experience food insecurity in our county, including 6,090 children.

The projected rates for overall and child food insecurity rates in Washtenaw County are slightly lower compared to the state and national levels. Source: Feeding America, the Impact of Coronavirus on Food Insecurity, March 29, 2021. 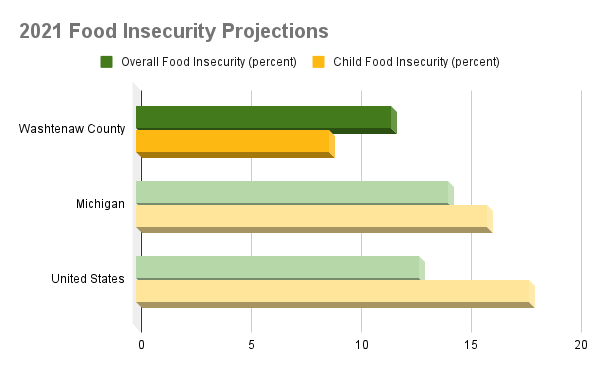 Millions of children and families living in America face hunger and food insecurity every day.

Nutritious food plays an essential role in health, and a lack of sufficient food and the right type of food can lead to devastating health outcomes. People who are food insecure are disproportionately affected by diet-sensitive chronic diseases such as diabetes and high blood pressure. Being food insecure often means making tough choices between paying for food and paying for medicine and/or medical care.

Consistent access to affordable, healthy food is also influenced by factors like poverty and discrimination. As a result, food insecurity is also an issue of equity and has a disproportionate impact on low-income households, Black and Hispanic families, female-headed households, and families with children.

To increase food security for everyone, we must actively incorporate equity into our responses. By examining the fundamental causes of food insecurity and health inequities, we can work to dismantle systemic racism, which is at the root of inequities in health, hunger, and economic opportunity.

Looking for additional information on hunger? Click on the button below for a list of additional resources.